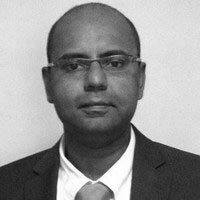 Aananth is an accomplished executive with deep, hands-on experience in technology and design lead innovation. He has successfully built, scaled, and monetized products in markets stretching from North America to South Korea at both corporates and startups. A natural leader, he believes in building A-player teams with an emphasis on genuine people development.

Aananth started his career at Oracle Corp. where he was a software engineer and then moved to Amazon.com where he built solid foundations in systems thinking, design of large-scale

systems, product development, and team leadership. He joined Standard Chartered Bank, in Singapore and rose through the ranks quickly to lead the bank’s nascent mobile banking initiative. As the Global Head of Mobile Banking for the consumer bank, he oversaw the development and launch of the multi-award-winning Breeze suite of mobile applications now live in 19 markets in Asia, Africa, and Middle-east with more than a million customers.

In 2012, Aananth Co-Foundedwww.welab.co, a fin-tech startup based out of Hong Kong and China. At Welab, in a span of just 2 years, he built the region’s first p2p platform with a lean team of 30 engineers and successfully transplanted & scaled it in China. Apart from playing a pivotal role in raising US $20 million venture investments from Sequoia Capital and Horizon Ventures.

Aananth is currently co-founder and CTO @ WeInvest.net a digital wealth startup redefining the investment experience for the emerging affluent in Asia. He has also consulted with Sequoia Capital where he advised portfolio companies in scaling up their platforms and teams. Aananth lives in Singapore with his wife and 2 daughters. He is an active meditator and spends his free time volunteering for NGOs involved with holistic education for kids, which is an area he is most passionate about. He holds an M.S. in Software Systems from BITS, Pilani, India.